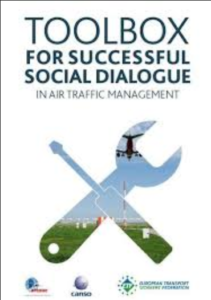 Over the last several years following on from the ‘Venice Conference on Social Dialogue in the Single European Sky’ in 2011, ETF together with the other social partners ATCEUC and CANSO (The ATM Social Partners) have been working on a ‘best practice’ guide on how social dialogue could be improved and strengthened between unions and employers. As we have seen over the last few years with the implementation of SES, and again in the communication from the Commission on its proposals for the new Aviation Strategy in December 2015, social dialogue and particularly the impact of strikes is a common theme the airlines like to use to attack workers. As a way of countering this the ATM social partners have been exploring ways to improve social dialogue as a counter balance to the airlines arguments. A good relationship between a company and its staff is crucial both for achieving fair working conditions and for the company to run efficiently and smoothly. To aid in the creation of the toolbox, a questionnaire was distributed to unions and employers to identify areas of social dialogue practice that worked well. Over the following few months a small team of representatives from the 3 social partners analysed the results and identified these common areas of best practice from the results.

As this was progressing the social partners also successfully applied for funding from the European Commission to launch a social dialogue project, aimed at examining and progressing work on the social dialogue toolbox, staff mobility and just culture. The social dialogue toolbox work was brought inside this project and funding made available for a workshop, held in Dublin in October 2015, to finalise the work and produce the finalised ‘Social Dialogue Toolbox’. This document to be published shortly as a brochure as well as being published on the website is a resource for unions and employers to use as they see fit to aid social dialogue in their own organisations. The document is divided in to several chapters giving best practice guidance on topics such as behaviour of the social partners, information and consultation, and dispute resolution, amongst others.

The document is a resource to be used by any affiliate and their employers to help in creating meaningful social dialogue within their particular organisation.