ETF STRONGLY OPPOSES THE ATTACK ON FUNDAMENTAL RIGHTS OF ATCOs 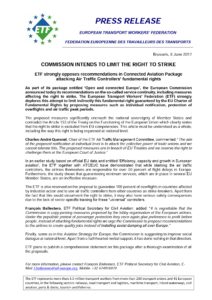 As part of its package entitled ‘Open and connected Europe’, the European Commission announced today its recommendations on the so-called service continuity, including measures affecting the right to strike. The ETF strongly deplores this attempt to limit indirectly this fundamental right guaranteed by the EU Charter of Fundamental Rights by proposing measures such as individual notification, protection of overflights and air traffic peak periods.

The proposed measures significantly encroach the national sovereignty of Member States and contradict the Article 153 of the Treaty on the Functioning of the European Union which clearly states that the right to strike is excluded from EU competencies. This article must be understood as a whole, including the way this right is being organised at national level.

Charles-André Quesnel, Chair of the ETF Air Traffic Management Committee, commented: “The aim of the proposed notification at individual level is to attack the collective power of trade unions and we cannot tolerate this. The proposed measures are in breach of EU Treaties and we reserve the right to challenge them at the European Court of Justice.”
In an earlier study based on official EU data and entitled ‘Efficiency, capacity and growth in European aviation’, the ETF together with ATCEUC have demonstrated that while blaming the air traffic controllers, the airlines themselves are responsible for over 50 percent of flight delays in Europe. Furthermore, the study shows that guaranteeing minimum services, which are in place in several EU Member States, are an ineffective measure.
The ETF is also reserved on the proposal to guarantee 100 percent of overflights in countries affected by industrial action and to use air traffic controllers from other countries as strike-breakers. Apart from the fact that this would circumvent the right to strike, it may also have serious safety consequences due to the lack of sector-specific training for these “universal” controllers.
François Ballestero, ETF Political Secretary for Civil Aviation, added: “It is regrettable that the Commission is copy-pasting measures proposed by the lobby organisation of the European airlines. Under the populistic pretext of passenger protection they once again give preference to profit before people. Instead of attacking fundamental rights we urge the Commission to propose recommendations to the airlines to create quality jobs instead of installing social dumping all over Europe.”
Finally, same as in the Aviation Strategy for Europe, the Commission is suggesting to improve social dialogue at national level. Apart from a half-hearted verbal support, it has done nothing in that direction.
ETF plans to publish a comprehensive statement on this package after a thorough examination of all the proposals