European aviation has been amongst the first industries to be impacted by the COVID-19 crisis and will be one of the hardest hit. Support to the workforce and the industry will ensure a lifeline for the sector that will guarantee its recovery after the pandemic. ETF calls for conditional financial aid to aviation-sector companies and immediate support to all workers in civil aviation, with special attention given to the most vulnerable among them.

Workers that make European aviation move are a heterogeneous group – from aircrew, over air traffic management to ground handling, catering and cleaning staff. In large parts of aviation, precarious work prevails over traditional work contracts, and zero-hour contracts or temporary agency work are booming. Precarious workers’ salaries are significantly below national averages and in some cases even below the poverty line. These groups of workers were immediately affected by the COVID-19 crisis as they had no reserve to fall back on.

ETF calls on the European Institutions and the Member States to put in place a rescue plan consisting of direct support for workers as well as conditional financial aid to aviation-sector companies.

Financial assistance can only be granted if the respective company respects job retention and income protection measures. All aviation companies must be aware of their social responsibility and make sure that their most valuable asset – the workforce – is adequately protected.

Any financial aid to aviation-sector companies should also be conditional on a ban on pay-out of dividends to shareholders in 2020 (as a minimum) and a ban on stock buybacks by companies.

EU must ensure that the European idea of integration and democracy materialises for the working people and specifically for the most vulnerable.

ETF calls for an aviation rescue plan and EU fundDownload

Being the sole representative of all categories of European aviation workers across the whole industry, the ETF Civil Aviation Section reiterates its urgent call to the decision-makers at EU and national level to safeguard the future of European aviation. Our industry is at a crossroads: either the current COVID-19 crisis completely decimates it or we turn the current events into an opportunity to rebuild the sector and learn lessons from the past.
As we already said in our previous statements, urgent measures are needed in the short, medium and long term.

You can also download a joint statement we have published with the other social partners here:

STOP TARGETS ON THE PERFORMANCE SCHEME IN AIR TRAFFIC MANAGEMENT

Prior to the Transport Council of December ETF and the other Professionnal Staff Organisations are giving their views on the actual need and the future of the Single European Sky. The voice of the workers of the european ATM industry needs to be heard.

As representatives of the ATM workers directly involved, we request that there is a pause in the non-achievable targets of the performance scheme. However, we recommend that the SES initiatives focus on realistic and
implementable projects with benefits that can be linked to achievable performance scheme targets. We also demand that the industry and the EU work on common standards that will improve the strongly needed
interoperability of our systems.
Finally, as it started in the EASA, the social impact of any further regulation should be assessed in detail, in order to avoid the mistakes of the past.

THE ETF REJECTS THE MARKET-DRIVEN APPROACH FOR THE SINGLE EUROPEAN SKY!

Following the report on the Future of the Single European Sky drafted by the ‘Wise Persons Group’ (WPG) created by the European Commission, the ETF deplores that the recommendations are oriented to please the airlines to the detriment of the other stakeholders. The ATM staff are more and more critical to the method which consists of listening mainly officials who have a business-driven sensitiveness against the quality of the service. For the ETF, it is clear that the safety and the security of the passengers and the non-flying citizens on ground are paramount.

The European Transport Workers’ Federation (ETF), which represents more than 15.000 Air Traffic Controllers and all the other categories of the Air Traffic Management (ATM) staff, noticed, for instance, that the Social Dialogue doesn’t exist for the ‘Wise Persons Group’ while it is indispensable to smoothly achieve all the changes proposed in the report. At EU level, the social partners can make recommendations to their members notably to create success stories through a good and genuine social dialogue.

The ETF is not rejecting a digital European sky by a progressive increase of the level of automation support, new technologies as well as the use of interoperable systems. Nevertheless, it is obvious that the modernisation of the European ATM leading to a new organisation of the work, especially at the workplace, needs to be carefully monitor notably through a change management process established together with the staff representatives at all levels. It is a pity that staff such as AIS/AIM had no representative in this WPG.

The ATM is a service of general interest and it is the ETF view that safety seems to play a marginal role for the WPG compared to other criteria such as economic performance. It is the case when the WPG proposes to set up an independent competent economic regulator which would oversee the performance of service providers. The ETF is totally opposed to such a body which will be lobbied by the airlines associations, without a public control.

At the same time, Eurocontrol would have more power as Network Manager (NM), with the risk of becoming a new monopoly, which is against the EU policy. The most important is that the WPG does not mention that the first mission of the NM is safety and not a creator of capacity. Strangely, they want to empower it for managing the capacities of the service providers but not towards the behaviour of the airspace users which is causing a lot of inefficiencies in the network.

In conclusion, the ETF calls the European Commission to organise a round table with all concerned parties to discuss this report in order to come to a more balanced approach. There would be a real added value to ask the opinion of all the EU ATM staff representatives to make the Single European Sky more efficient in the future.

Following the adoption of the new performance and charging regulation, the Commission is currently in the process of setting the targets for RP3. We have joined with the other PSOs in expressing our concern at the proposed targets. The targets are broadly more of the same that we saw in RP2 and will do nothing to ease the current capacity problems. The level of cost reduction required is worrying and we are having great difficulty in seeing just how capacity can be improved whilst making savings.
At the next Single Sky Committee meeting at the end of March, it is expected that the Member State representatives will vote on the proposed targets. We have, with the other PSOs, written to those state representatives expressing our concern and asking them to push for a modest rise in costs to help resolve the ongoing capacity problems.

ATM Unions determined to defend the right to strike 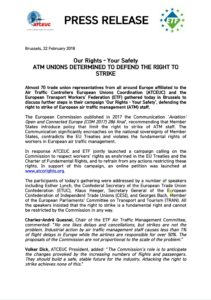 Almost 70 trade union representatives from all around Europe affiliated to the Air Traffic Controllers European Unions Coordination (ATCEUC) and the European Transport Workers' Federation (ETF) gathered today in Brussels to discuss further steps in their campaign ‘Our Rights – Your Safety’, defending the right to strike of European air traffic management (ATM) staff.
The European Commission published in 2017the Communication ‘Aviation: Open and Connected Europe (COM 2017) 286 final’, recommending that Member States introduce policy that limit the right to strike of ATM staff. The Communication significantly encroaches on the national sovereignty of Member States, contradicts the EU Treaties and violates the fundamental rights of workers in European air traffic management.

END_OF_DOCUMENT_TOKEN_TO_BE_REPLACED

Our Rights, Your Safety 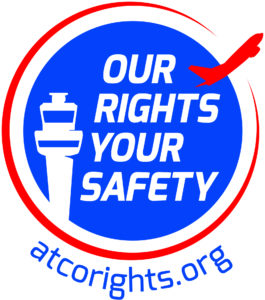 The Air Traffic Controllers European Unions Coordination (ATCEUC) and the European Transport Workers' Federation (ETF) have launched today a campaign to oppose the European Commission will to shape and limit the Air Traffic Controllers(ATCOs)’ right to strike. Indeed, Commission encroaches the national sovereignty of Member States as the right to strike falls outside the scope of the Treaties.

The recommendations of the European Commission that are inside the Communication ‘Aviation: Open and Connected Europe (COM 2017) 286 final’ dated on 8 June 2017 significantly encroach the national sovereignty of Member States and contradict the Article 153 of the Treaty on the Functioning of the European Union which clearly states that the right to strike is excluded from EU competencies.

END_OF_DOCUMENT_TOKEN_TO_BE_REPLACED 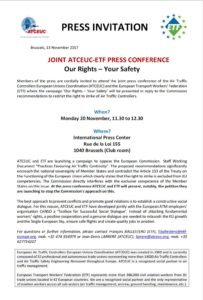 OUR RIGHTS, YOUR SAFETY.

On 20th November at the International Press Center in Brussels

Airlines cause 1 million minutes of delay while blaming others 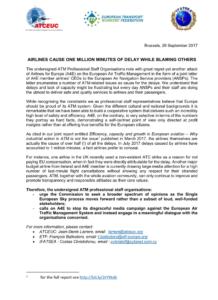 The undersigned ATM Professional Staff Organisations note with great regret yet another attack of Airlines for Europe (A4E) on the European Air Traffic Management in the form of a joint letter of A4E member airlines’ CEOs to the European Air Navigation Service providers (ANSPs). The letter enumerates a number of ATM-related issues as cause for the delays.
END_OF_DOCUMENT_TOKEN_TO_BE_REPLACED