Since last EUROCONTROL Provisional Council, ETF has been following the development of the “Deloitte Report” which aimed to implement some reforms including staff regulations and for which very little information and details were given to the concerned parties making all the 17 given recommendations unclear.

Therefore, the ETF met with the EUROCONTROL Head of DG Office to discuss actions so far taken and the continued objectives of the Deloitte report. While they are trying to implement some of the recommendations, there remains one outstanding element, that being the reform of the staff regulations including working conditions. The ETF continues to make it clear that the European ATM community will not stand for a forced or unfair implementation of lesser working conditions. As an Agency, continued constructive social dialogue is essential and the only way this issue can be managed.

While we encourage EUROCONTROL to continue social dialogue, we remain concerned that there is still no endorsement from the Provisional Council of EUROCONTROL for the staff regulations reform.

ATM Committee Chairperson Gauthier Sturtzer stated: “the staff regulations reform requires a mandate from the Members States that so far EUROCONTROL has not received.”

The ETF stands in solidarity with the social partners at EUROCONTROL, and continues their commitment to support them in their continued dialogue with EUROCONTROL during this difficult time.

On the 26th of April 2022, the EU-level ATM social dialogue meeting gathered online at the invitation of the European Commission. While the staff in ATM was represented by around 20 people from all around Europe (most present in person), only one person attended on behalf of the employers, namely a permanent staff of CANSO Europe.

Gauthier Sturtzer, ETF ATM Committee Chair declared: “For a dialogue to be effective, all parts involved need to be actively engaged with the process and committed to successful outcome. Therefore, during today’s meeting the staff representatives were compelled to request the meeting to be cancelled”.

END_OF_DOCUMENT_TOKEN_TO_BE_REPLACED

On the initiative of its Director General Mr Eamonn Brennan, EUROCONTROL commissioned a “fundamental review” of the Agency’s activities. The contract was awarded to Deloitte in September 2020 and a final report was published at the end of January.
Both ETF and ATCEUC agree that despite its ambitions, the review and its 17
recommendations appear nothing more than a collection of incoherent statements, without any in-depth analysis of their effectiveness, their impact or their cost. It is extremely surprising that Deloitte considered this report fit for publication: for one, it clearly goes well beyond the terms of reference, to the point of suggesting significant institutional changes to the Agency’s setup – something that was explicitly excluded from the scope of the review.

Charles - André Quesnel, Chair of the ETF ATM Committee, added: “The review makes vague,completely unsubstantiated projections of cost savings while clearly risking disruptions to service delivery of Maastricht UAC, Europe’s only cross-border ATC centre, and other essential services of the Agency such as training and research and development. Some recommendations will substantially increase the costs for the airspace users and Member States, as Mr Brennan appears to be prepared to drastically change the core mission of the Agency as an independent and neutral entity at the service of both the States and the airspace users.”

Volker Dick, President of ATCEUC, noted: “While the report is concerning in itself, we are extremely disturbed by the methodology, or more precisely the lack thereof, that Deloitte used. All stakeholders were asked different questions, and we have the distinct impression that staff representatives were only included to give an impression of objectivity. None of the
questions we were asked, and certainly none of the answers, are reflected in the report.”
Mr Dick continued: “The study is nothing more than a very obvious attempt from Mr Brennan to hollow-out the EUROCONTROL Agency and to push more things towards privatized subsidiaries of the larger ANSPs. The distress this review has caused within the Agency and beyond – the study recommends a privatized Maastricht UAC takes over the Karlsruhe
airspace – is considerable. Many of our members have expressed anxiety and concerns for their immediate future. In a safety-critical, operational environment and during a global health crisis of unseen proportions, it shows a complete lack of managerial responsibility for the well-being of the Agency’s staff!”

European aviation has been amongst the first industries to be impacted by the COVID-19 crisis and will be one of the hardest hit. Support to the workforce and the industry will ensure a lifeline for the sector that will guarantee its recovery after the pandemic. ETF calls for conditional financial aid to aviation-sector companies and immediate support to all workers in civil aviation, with special attention given to the most vulnerable among them.

Workers that make European aviation move are a heterogeneous group – from aircrew, over air traffic management to ground handling, catering and cleaning staff. In large parts of aviation, precarious work prevails over traditional work contracts, and zero-hour contracts or temporary agency work are booming. Precarious workers’ salaries are significantly below national averages and in some cases even below the poverty line. These groups of workers were immediately affected by the COVID-19 crisis as they had no reserve to fall back on.

ETF calls on the European Institutions and the Member States to put in place a rescue plan consisting of direct support for workers as well as conditional financial aid to aviation-sector companies.

Financial assistance can only be granted if the respective company respects job retention and income protection measures. All aviation companies must be aware of their social responsibility and make sure that their most valuable asset – the workforce – is adequately protected.

Any financial aid to aviation-sector companies should also be conditional on a ban on pay-out of dividends to shareholders in 2020 (as a minimum) and a ban on stock buybacks by companies.

EU must ensure that the European idea of integration and democracy materialises for the working people and specifically for the most vulnerable.

ETF calls for an aviation rescue plan and EU fundDownload

Being the sole representative of all categories of European aviation workers across the whole industry, the ETF Civil Aviation Section reiterates its urgent call to the decision-makers at EU and national level to safeguard the future of European aviation. Our industry is at a crossroads: either the current COVID-19 crisis completely decimates it or we turn the current events into an opportunity to rebuild the sector and learn lessons from the past.
As we already said in our previous statements, urgent measures are needed in the short, medium and long term.

You can also download a joint statement we have published with the other social partners here:

NO TO UNBUNDLING FOR THE AIR NAVIGATION SERVICES SPECIALISTS (ANSSs)!

SOCIAL DIALOGUE IS NEEDED MORE THAN EVER TO BUILD THE SINGLE EUROPEAN SKY!

Following the first round table discussions on the future of the Single European Sky on 28 May 2019 and the report of the Wise Persons Group (WPG), please find below follow up comments on behalf of the ETF with respect to those discussions and the WPG report.
Overall, we are disappointed that the ETF was not involved at all in the works of the WPG despite the fact that we represent 30.000 employees (in all categories of ATM staff: ATCOs, ATSEPS, AIS, administrative staff).
In addition, there has been little involvement of staff in the recent work involving the evolution of SES:
• Although there was a consultation process for the Airspace Architecture Study (AAS), our inputs were not properly considered. Some concepts such as ADSP bring many social consequences that were not discussed at all.
• Regarding the WPG, all ATM social partners from the employee side are quite critical towards the report. This again is further evidence that the Commission is not adequately considering the expertise of the ATM workers that is available, and it is the daily front line workers that are most aware of the problems the ATM industry is facing today.
There is an unhealthy culture emerging that is suggesting that the recommendations cannot be challenged, and are taken by default as correct. This is a dangerous assumption. Healthy, constructive challenge and exchange of ideas (which ETF strives to provide) can only help to strengthen any proposals going forward.
Finally, the approach followed by the WPG totally ignores the importance of the social dialogue in the EU polices and mechanisms to be implemented. Without a qualitative social dialogue, that allows management and unions to find joint solutions at all levels, including at EU level, any policies or recommendations will encounter concrete difficulties in the definition and implementation phases.

Do you think that right to strike is a fundamental right for all workers?
The EU Commission is trying to blame air traffic management staff for flight delays and encourage countries to limit their right to strike. That’s not #FairTransport!

Strikes in air traffic management are not a major cause of delays, and workers strike to defend safety for all passengers. Anyway, this is an area where the EU has no power, so why are they interfering?

Today air traffic management staff are under attack, but tomorrow could be your turn. The right to strike must be protected. If you agree with us, sign this petition from ETF and ATCEUC here:

Change Management in the ATM Industry 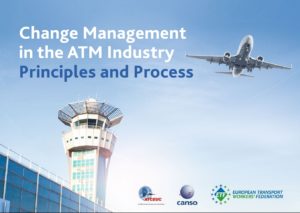 In the framework of their joint social dialogue project entitled ‘Reinforcement of Social Dialogue in the field of Air Traffic Management’, the ATM Social Partners (ATCEUC, CANSO and ETF) jointly identified change management, the social impact of the introduction of new technologies and automation as key priorities for their future work.

The purpose of this paper is to define principles for the management of significant changes which will impact the company, management and staff and to outline guidelines for both managers and unions to enable the change management process to operate smoothly. It is recognised that any significant transformation programme will create people issues, involving changes to jobs, development of new skills and capabilities which will cause uncertainty and possible resistance.