Joint Public Statement on the Regulation of Remote Towers Operation 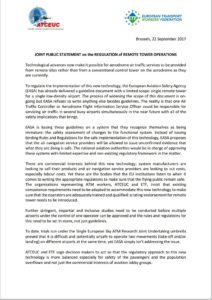 Remote Tower technology is used, or planned to be used in the very next future, by more and more Air Navigation Service Providers.
Yet the ATM staff representative organizations ETF and ATCEUC do not believe that the regulatory approach to this subject by EASA is appropriate and effective. After months trying to convince EASA to reconsider the approach and to listen to our concerns, we decided time has come to go public with this joint public statement you find attached. 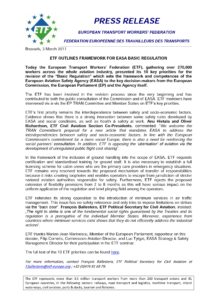 Today the European Transport Workers' Federation (ETF), gathering over 270,000 workers across the whole aviation industry, presented its 10 key priorities for the revision of the “Basic Regulation" which sets the framework and competences of the European Aviation Safety Agency (EASA) to the key decision-makers from the European Commission, the European Parliament (EP) and the Agency itself.

END_OF_DOCUMENT_TOKEN_TO_BE_REPLACED

Today, unmanned aircraft are being used among other things for aerial filming and photographing, safety inspections of pipelines or buildings or by farmers. Tests are being performed for delivery of goods or even transport of passengers.
The Aviation Strategy for Europe presented by the Commission in December 2015 states: "unmanned aircraft share the same airspace with other aircraft [and therefore] the safety of their operations must remain coherent with the overall aviation safety policy. Finally, unmanned aircraft operations must also be consistent with air traffic rules as laid down in the Common Rules of the Air."
Due to the rapid development of RPAS, the ETF strongly supports the inclusion of RPAS into the scope of the EASA Basic Regulation, as well as other regulatory initiatives aiming to ensure a safe co-existence of manned aircraft and RPAS in line with the principle "one sky – one safety".

The European Transport Workers’ Federation (ETF), the biggest representative of workers in the European aviation and in the air traffic management, has been participating in the rulemaking process on air traffic services within the European Aviation Safety Agency (EASA) for the past two years. We are now proud to announce that a proper recognition of Aerodrome Flight Information Services (AFIS), as well as the workers involved – Flight Information Service Officers (FISOs) – within the framework of air traffic services is underway. 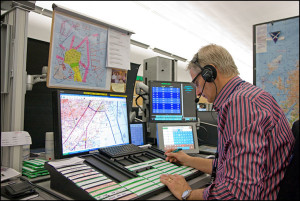 END_OF_DOCUMENT_TOKEN_TO_BE_REPLACED

The ETF EASA strategy is to be involved at the highest possible level within EASA to influence the opinion and outcome of stakeholders at the relevant EASA meetings, so that the rules and regulations reflect the opinion of the ETF members. Our mission is to ensure that the rules and regulations are representative of our views protecting member’s safety and interests and to ensure commercial interests don’t drive these regulations.

The purpose of this ETF/EASA reference handbook is to provide ETF affiliates with information about EASA, its structure, Rule Making Process and Procedures and the involvement of Stakeholders, for example ETF.

This handbook is part of our goals and objectives in achieving our ETF strategy as the information is the pre-requisite to influence the Regulations and the Decisions on safety taken by the EU decision-makers. END_OF_DOCUMENT_TOKEN_TO_BE_REPLACED

Today, Monday 1 October 2012, the European Aviation Safety Agency (EASA) has issued its Opinion on Flight Time Limitations (FTL) for cabin crew and pilots. It contains a revised set of rules which ignores the impact of staff fatigue on flight safety. The ETF is highly concerned about passengers’ safety since EASA has clearly disregarded scientific evidence when drafting its rules on FTL. END_OF_DOCUMENT_TOKEN_TO_BE_REPLACED

Letter to EASA on ATCO Licencing

"Provisional inability" is designed to increase safety in the working environment.
“Competence in doubt” is against the just culture concept, supporting a “blame culture” that will risk to jeopardize the reporting system and the safety of the sector. END_OF_DOCUMENT_TOKEN_TO_BE_REPLACED